Yes, Virginia, there is a Santa Claus.

I am eight years old. Some of my little friends say there is no Santa Claus.

Papa says, "If you see it in The Sun, it's so." Please tell me the truth, is there a Santa Claus?

Virginia, your little friends are wrong. They have been affected by the skepticism of a skeptical age. They do not believe except what they see. They think that nothing can be which is not comprehended by their little minds. All minds, Virginia, whether they be men's or children's, are little. In this great universe of ours man is a mere insect, an ant, in his intellect, as compared with the boundless world about him, as measured by the intelligence capable of grasping the whole truth and knowledge.

Yes, Virginia, there is a Santa Claus. He exists as certainly as love and generosity and devotion exist, and you know that they abound and give to our life its highest beauty and joy. Alas! How dreary would be the world if there were no Santa Claus! It would be as dreary as if there were no Virginias. There would be no childlike faith then, no poetry, no romance, to make tolerable this existence. We should have no enjoyment, except in sense and sight. The eternal light with which childhood fills the world would be extinguished.

Not believe in Santa Claus! You might as well not believe in fairies! You might get your papa to hire men to watch in all the chimneys on Christmas Eve to catch Santa Claus, but even if they did not see Santa Claus coming down, what would that prove? Nobody sees Santa Claus, but that is no sign that there is no Santa Claus. The most real things in the world are those that neither children nor men can see. Did you ever see fairies dancing on the lawn? Of course not, but that's no proof that they are not there. Nobody can conceive or imagine all the wonders there are unseen and unseeable in the world.

You tear apart a baby's rattle and see what makes the noise inside, but there is a veil covering the unseen world which not the strongest men, nor the united strength of all the strongest men that ever lived, could tear apart. Only faith, fancy, poetry, love, romance can push aside that curtain and view and picture the supernal beauty and glory behind. Is it all real? Ah, Virginia, in all this world there is nothing else real and abiding. No Santa Claus! Thank God he lives, and lives forever. A thousand years from now, Virginia, nay ten times ten thousand years from now, he will continue to make glad the heart of childhood.


At a time of incredible challenge to values and fundamentals, we turn to this editorial written by Francis Pharcellus Church that appeared in the New York Sun on September 21, 1897 and say, simply, to our Creator, Thank You for this boundless world filled with beauty and joy.  We pray that Your light will shine upon the little minds of the Santa skeptics. 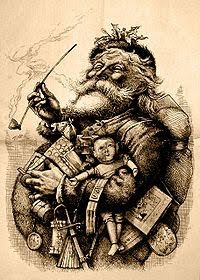 Posted by thefundamentals at 6:21 AM

I am fifth-eight years old,and some of my friends say there is no health care.Papa Obama says if you believe in the Son, it's not so.
Please tell me: Is there health care?
Virginia(Kansas, Ohio, Delaware, Utah, etc).

Yes Virginia, there is health care. From now on our Lord and Protector will provide you from all harm and danger.You needn't worry ever again about getting sick or having to go to the hospital and having to pay for it.
Best of all, it's free.Our Savior and his angels Pelosi and Reid, will make the evil rich pay for it.
Now, soon you will hear that there is not enough good care for all. You will notice that Our Savior will fairly restrict the care available. You may not have your grandparents with you as long as you would like, but remember, they have been on our mother, Earth, a long time and have no useful contribution to make, and mother Earth needs to recycle them for her health.
Now, please understand something else; That baby brother you have wanted will probably not be coming. In his wisdom, Our Lord, will permit AND PAY FOR,and even encourage Moms to perform an FREE procedure to stop your brother from arriving. It's all part of what Angel Pelosi calls a mom's right to choose. Just remember, President Savior and his band of angels know what's best for you, even if you think you do.
Finally, Virginia, you may notice a funny feeling from all this: even though you need not worry anymore about having good health care or having to pay for it. you may notice a slight tightening in your freedom. It may be harder to make ends meet. You might not be able to have that house of your own that you always wanted. A vacation might not happen every year; you'll have to keep that clunker another year or two. It may require some prison time if you decide you don't want to go along with these small sacrifices.
In other words, it may cost you a little freedom. But don't worry. After all, we were brought to mother Earth so that we could all work hard for those who don't, and what Christmas is all about is sharing. Even if it has to be at the point of a gun.