It is staggering to see the power of Israeli influence on American governance; American foreign policy and the withdrawal of funds from the pockets of American taxpayers.  It is also almost heretical to even mention it.  This may explain why it is seldom discussed on TV, in print and by other media outlets and, in the one place where it should be front and center in debates – the American congress.


Here is an accounting of what America has provided Israel since its inception:


Please note that most of this “aid” is for military purposes.  This is not humanitarian aid.
Here is a comparison of recent top aid recipients 2008 and 2012.  Since WWII, Israel has received more aid than any other recipient – substantially more. 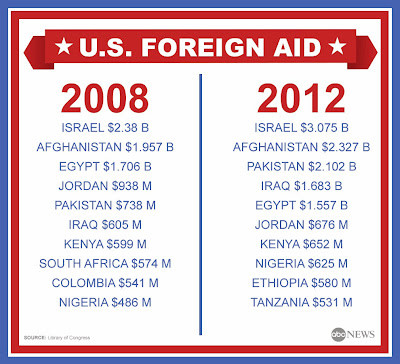 As you know, America does not have this money – it is borrowed or just printed by Ben Bernanke, backed by bonds issued by Obama’s treasury department, delivered to the state department and electronically transferred to the recipients in many cases.  We don’t know much about where it goes after that.   Sometime taxes will need to be collected to settle the debt but today it is a simple Washington process – influence gets dollars which add to deficits that pile up as American taxpayer obligations.


Debt.  By the billions.
Posted by thefundamentals at 4:24 PM