No Country for Older Men

Who makes change?  The old?  Not really.  They talk change.

What's Wrong With This Picture ? 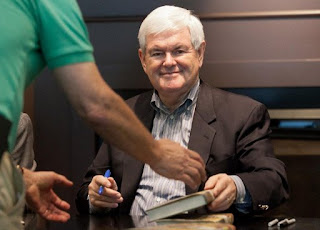 The man in the picture is running for the office of president of the United States or at least he represents that such is the case.  So, why is he signing and selling books at the same time?  Why is he grinning as if he has just made another successful investment on the road to wealth accumulation?  Why is he smug when his country is in debt up to its eyeballs and he wants us to vote for him as its leader for the next four years?
What, on earth, is wrong with this picture?
Two hundred and thirty five years ago the colonial United States were under the domination of a foreign royalty that had valid and just claims to the territory they occupied.  At least in historical, legal terms they could make that claim.  The basis for the claim was simply might makes right.  If you can fight for it and prevail, it’s yours.  Today that power and control rests with an unelected, burgenoning bureaucratic presence in Washington DC, every state capitol and every city/town/village/school district in the country.  It controls law making, spending and borrowing activities, elections and taxation policy.
Back to 1776.  A group of colonial citizens were fed up with the shenanigans of this royalty and their governors and bureaucrats; their military presence and their wars and their taxation policies.  They wanted to be free.  They sought the ability to control their own destiny.  They believed that God had given them the right to be so endowed.  To be able to make decisions for themselves.
So, they gathered together with their disparate views and agendas and set out to separate themselves from the “might makes right” fellows.  Knowing full well that to accomplish their ends, self rule, would mean a battle of the ages.  Not words; war.  Death.  Destruction.
They sent a note to the ruler and the world and they laid out their positions; their claims; their thinking and stated that henceforth they would be independent of the ruler and his minions.  But they knew it would be difficult and that it could fail.  So, in closing, they uttered these words to put all on notice of their intent:
“And for the support of this Declaration, with a firm reliance on the protection of divine Providence, we mutually pledge to each other our Lives, our Fortunes and our sacred Honor.”
And then they signed it; just like the smiling, chubby fellow in the picture is signing his books, they put their names on the document for all to see.  By the act of signing their document they became traitors.  They signed and subjected themselves to death warrants as traitors to the British crown.
So, the chubby fellow signs his books of history and guidance; of recommendations and ideas; of stories and claims and positions and then sells them and pockets the money.  All while asking us to support him and his claim to leadership.
The other fellows signed their names and put their lives and fortunes at risk for their ideas and historical views and their plans for the future.  They did not seek personal gain.  Instead they risked all they had, every cent they had and their most valued gift – their lives.
Can you detect the difference between leaders and pretenders?  We can.  Our position is this - if you wish to make money don't run for any political office.  If you want to make money either during or after you time in office, using your ideas and your time and your  experiences, don't run for office.  If you think your ideas are worthy of following put your time and energy; your pocketbook and your privacy at risk.  If you have made money off being in office turn it over to the people who paid your way while you were in office (think Clinton.)  If you cannot grasp this concept you may be inclined to follow pretenders.  If you need further edification to understand our position, please refer to the Declaration of Independence.  It is only 1,322 words long; it is free; no need to pay for it; it was signed by 56 men.   Have you ever heard of Arthur Middleton, Button Gwinnett, Abraham Clark, William Paca, William Williams and John Hart?  You may not recognize these names.  They were traitors along with Thomas Jefferson, Benjamin Franklin, John Hancock and Francis Lightfoot Lee.   There is not a Newton Leroy Gingrich among them.
Now you know what is wrong with this picture.
Posted by thefundamentals at 6:46 AM 116 comments:

The year that is drawing toward its close has been filled with the blessings of fruitful fields and healthful skies. To these bounties, which are so constantly enjoyed that we are prone to forget the source from which they come, others have been added which are of so extraordinary a nature that they can not fail to penetrate and soften even the heart which is habitually insensible to the ever-watchful providence of Almighty God.

In the midst of a civil war of unequaled magnitude and severity, which has sometimes seemed to foreign states to invite and to provoke their aggression, peace has been preserved with all nations, order has been maintained, the laws have been respected and obeyed, and harmony has prevailed everywhere, except in the theater of military conflict, while that theater has been greatly contracted by the advancing armies and navies of the Union.

Needful diversions of wealth and of strength from the fields of peaceful industry to the national defense have not arrested the plow, the shuttle, or the ship; the ax has enlarged the borders of our settlements, and the mines, as well as the iron and coal as of our precious metals, have yielded even more abundantly than heretofore. Population has steadily increased notwithstanding the waste that has been made in the camp, the siege, and the battlefield, and the country, rejoicing in the consciousness of augmented strength and vigor, is permitted to expect continuance of years with large increase of freedom.

No human counsel hath devised nor hath any mortal hand worked out these great things. They are the gracious gifts of the Most High God, who, while dealing with us in anger for our sins, hath nevertheless remembered mercy.

It has seemed to me fit and proper that they should be solemnly, reverently, and gratefully acknowledged, as with one heart and one voice, by the whole American people. I do therefore invite my fellow-citizens in every part of the United States, and also those who are in foreign lands, to set apart and observe the last Thursday of November next as a day of thanksgiving and praise to our beneficent Father who dwelleth in the heavens. And I recommend to them that while offering up the ascriptions justly due to Him for such singular deliverances and blessings they do also, with humble penitence for our national perverseness and disobedience, commend to His tender care all those who have become widows, orphans, mourners, or sufferers in the lamentable civil strife in which we are unavoidably engaged, and fervently implore the imposition of the Almighty hand to heal the wounds of the nation and to restore it, as soon as may be consistent with the divine purpose, to the full enjoyment of peace, harmony, tranquility, and union.

In testimony whereof I have hereunto set my hand and caused the seal of the United States to be affixed.

Done at the city of Washington, this 3d day of October, A.D. 1863, and of the Independence of the United States the eighty-eighth.

This video depicts the president of the Chicago public teachers union in a recent presentation to other “educators.”

It needs little editorial commentary. It is truly disgusting.

But we will make a couple of comments regardless.

1. We have made this comment before. How many of you would like this person on any person who would even elect such a person to a position of leadership teaching your child or grandchild?

2. If you are an employer, do you wish to hire youngsters who are being taught by this person or others who elect such a person to a position of leadership?

3. Why didn’t the people in the audience get up and leave?
Posted by thefundamentals at 7:11 AM No comments:

Say what you wish about the Chinese, they seem to be able to sum things up in just a few words:

“If you look at the troubles which happened in European countries, this is purely because of the accumulated troubles of the worn out welfare society. I think the labour laws are outdated. The labour laws induce sloth, indolence, rather than hardworking.”

Source of the quote? Fellow by the name of Jin Liqun who invests about $400 billion of China’s sovereign wealth. Guess it’s fair to say not too much of that capital will be invested in European businesses this year. We hope someone will get Mr. Liqun to communicate his sentiments about the good ole US of A and its disciplined economic environment.

Here’s a link to the article that was sent to us by a loyal follower and supporter of TheFundamentals.

We noticed that the American president was lecturing the Chinese about behaving like adults. Could someone please help us out with Obama’s thinking behind this remark? In less than three years in office, Obama and his congress and his treasury secretary and his federal reserve chairman have issue public debt totaling $4.3 trillion (all time record for our universe) while incurring incalculable trillions of contingent liabilities (these are the ones that the kids and grandkids get to pay) and spending record amounts of America’s wealth on completely nonproductive welfare like state programs and bureaucracies and, mostly, just over inflated salaries, benefits and pensions to unneeded government employees.

Apparently Obama calls this “acting grown up.” At TheFundamentals, we call it for what it is – sloth and indolence.  The Greeks and other European countries are pretty good at sloth and indolence.  Back here at home, we are even better at it and when we do it there are many more zeroes added to the invoice.

Just how long do you think the Chinese will fund slothful countries?
Posted by thefundamentals at 9:57 AM 62 comments:

Capitalism is under attack.  The movement appears to be growing.  Just wait 'til next summer.  Who started this entire hullabaloo?  Well, here is one possible explanation.

Posted by thefundamentals at 6:57 AM 52 comments: