…. we wrote and displayed our last essay.  It was about the failure of current public schools, in our large cities; which are actually displayed, to succeed in developing good reading skills in their students.  At the 8th grade level.

We ask you this simple question – have you heard any commentary from Hillary Clinton about this situation?  About this problem?

Or from most of the major Republican senators and congress men/women?  As well as their Democrat wonderments?

How about this – do you read about this situation regularly and thoroughly in your local paper or do you follow it on your local news cast and other forms of information shared sources of interest and news?

Has Paul Ryan spoke about this situation?  Sought legislation to end it – to get rid of teachers and their unions and their failure to accomplish what is not very difficult to do?

What about your house representative or either of your senators?  Are they regularly and diligently communicating to you just how important it is to them to fix this situation?  Are your local and state elected officials and the many, many well paid and so well protected employees working hard to put an immediate end to this horrible situation? 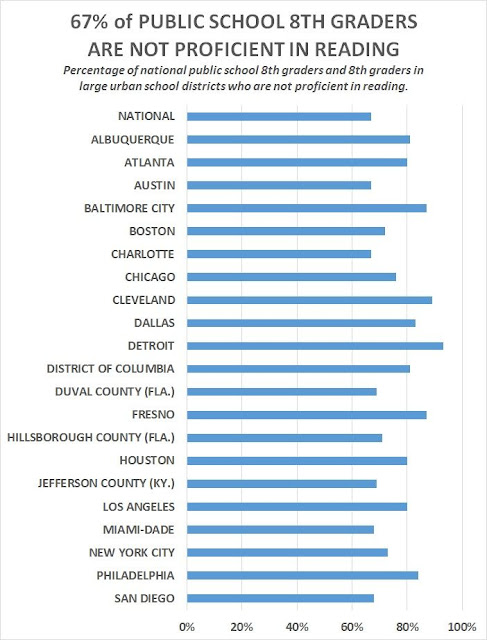 A new fellow has arrived on the scene in the last 12 months.  He brings the audacity; the disgusting vigilance; the miserable communication and the reckless suggestions that many, maybe even most, of our government elected folk and our government hired folk and their millions of other well paid and unionized and extremely outspoken fellow whatever you call them – are a problem – desperately in need of extreme resolution and vigorous removal.   What happens?


The community – the media – the elected folk – the ones who actually are paid for creating and extending and expanding the mess we live in – say “He’s got to go.”  “Get rid of him.”  “He is the problem.”  "I can't support him."

Go figure, folks.  We are living in a s***hole and most of us apparently are quite okay with it.  And Hillary and her boy Bill have made millions; actually well over a hundred million dollars, and the s***hole just keeps getting worse.

Boy, it will be fun watching Barack build his wealth wont it?

Posted by thefundamentals at 11:36 AM No comments: