Let’s see who’s raising a fuss and raising a holler:

1. Congressional Budget Office just issues their summertime essay entitled “Federal Debt and the Risk of a Fiscal Crisis.” It makes for good beach reading. Check it out at http://www.cbo.gov/doc.cfm?index=11659  Here are some highlights, so to speak (paranthetical comments added by TheFundamentals):

• …a growing level of federal debt would also increase the probability of a sudden fiscal crisis,
• during which investors would lose confidence in the government’s ability to manage its budget, (would lose?)
• and the government would thereby lose its ability to borrow at affordable rates.
• It is possible that interest rates would rise gradually as investors’ confidence declined,
• giving legislators advance warning of the worsening situation and sufficient time to make policy choices that could avert a crisis. (this comment is pretty rich)
• But as other countries’ experiences show, it is also possible that investors would lose confidence abruptly
• and interest rates on government debt would rise sharply.  (oops)
• The exact point at which such a crisis might occur for the United States is unknown… (ain't that the truth)

Now that the CBO has covered the ample layers of fat covering the federal bureaucratic gluteus maximus, it is time to leave Washington DC and its sultry warm environs and forget about such matters as record deficits and record debt. Or as the song suggest, “I'm gonna take two weeks, gonna have a fine vacation.” Two weeks? Oh well, the song was written in the 1950’s; back before there even was such a thing as federal employee unions.

2. The white house has convened the deficit and debt commission and they will report sometime after the elections. But they have already said, “ there aint no cure for the summertime blues.” Only the words they used were, “ Can’t tax our way out of it; can’t grow our way out of it. It’s a cancer.” Sounds like the song which said, “Well my mom and pop told me, "Son you gotta make some money.” You see, back in the 50’s the concept of “make some money” involved real work and real jobs in real wealth creating activities. The times they are a changing.

3. “Sometimes I wonder what I'm a gonna do…” Well, let’s see what the brilliant Ben Bernanke has to say about what he’s a gonna do. First let’s look back at what brilliant Ben had to say about rising housing costs a few years ago. October 27, 2005, testifying before a congress committee, brilliant Ben basically attributed the fast rise in house prices to "largely reflect strong economic fundamentals," such as strong growth in jobs, incomes and the number of new households. We don’t make this stuff up. You can check it out for yourself at http://www.washingtonpost.com/wp-dyn/content/article/2005/10/26/AR2005102602255.html  Aren’t you glad to know that the man who accurately recognized the nature of the housing bubble (that’s literary sarcasm) is now telling us to spend, baby spend and borrow, baby borrow but make sure you stop before something bad happens which if you keep spending and borrowing will happen. We hate to say it but having Ben follow the fool Greenspan is kinda like having Obama follow the fiscally promiscuous Bush .

So, what's a body to do? Well, here’s the CBO’s graphical display of public federal debt as a % of GDP. Mind you this is not the real debt but it is a deliberately reduced number so that the results don’t look as bad as they would if they showed you total debt including unfunded commitments: 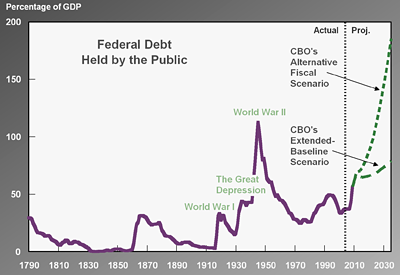 "I'm gonna take my problem to the United Nations
Well I called my congressman and he said Quote:
"I'd like to help you son but you're too young to vote"
We don’t know about the United Nations but we do know that the truth in this line from the song is overwhelming. I’d like to help you son (and daughter) but you’re too young to vote. Aint that the truth. Our gift to our children.  Talk about inheriting a mess; more debt than ever owed by any country in history!

Have some fun and let Eddie Cochran take you back to the good ole days - http://www.youtube.com/watch?v=MeWC59FJqGc
Posted by thefundamentals at 6:15 AM

I would like to exchange links with your site thefundamentalsus.blogspot.com
Is this possible?