Understanding Obamacare as an Entitlement

Last week, we presented an essay entitled – Understanding Obamacare as a Mandate.


Today, using government figures and projections we share with you the dollars and cents aspect of the Patient Protection and Affordable Care Act of 2009 (Obamacare) as an entitlement program. As with any entitlement program, there are at least three levels of costs to be considered:
·         The cost to taxpayers of the legislation in providing benefits to the beneficiaries (obviously)


·         And the cost coming from all those new services and products mandated by the law and provided by the vendors and suppliers who lobbied vigorously for the law.  The costs of these mandated additions, which we all pay for as we go, can be very difficult to determine. Think about a new car purchase - how much of the cost is coming from government mandated requirements???
Here is the link to the CBO analysis of the cost of Obamacare:  http://www.cbo.gov/publication/4417
Here is a summary of the CBO cost findings:
·         For the ten year period 2014 – 2023 the increased cost for the new beneficiaries is $1.798 trillion or $180 billion per year
·         During that period, new taxes, penalties and other receipts are projected to be $435 billion or $44 billion per year
·         Obamacare will increase the number receiving Medicaid and free children’s health care (CHIP) by an estimated 13 million individuals (new beneficiaries)
·         CBO projects that added bureaucracy cost (second bullet point above) at HHS and IRS – the two implementing bureaucracies will range, over this 10 year period, from $10 – 20 billion.  These costs are not included above.
·         Obamacare includes significant cuts to Medicare that have been estimated, over the 10 year period, to total $700 billion.  We cannot find any good source of specifics about these cuts.  In the past, previous Medicare cost reduction projections have not been realized due to a failure of congress to enact them.
·         Obamacare also included tax increases – mostly on high income taxpayers and added excise taxes on certain manufacturers and insurers.  These taxes and fees are projected to total $569 billion over ten years or $57 billion per year.
·         Here is a chart showing the increased net costs (remember, the government does not consider taxes a cost because they are revenues to them) in a February 2013 analysis and updated in May 2013 estimates (chart sourced at: http://www.cbo.gov/sites/default/files/cbofiles/attachments/43471-hr6079.pdf ) 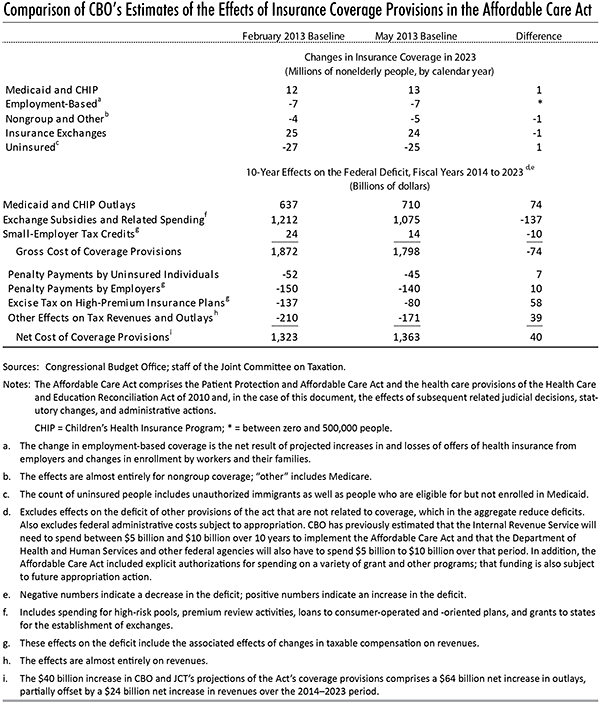 Now, anyone carefully following this disclosure of costs, “savings” and new taxes/fees can readily see that something very significant is missing.  It is the third bullet point in our opening paragraphs.  Obamacare includes all sorts of new mandated required “essentials” that are not added costs to the government but are added costs to those buying health insurance with their own money or their employers.
Who is going to pay for all the added costs to cover the mandated essentials?  Well the government estimates displayed above include the costs for those on the dole – you know them as Medicaid.  But for all the rest – the 240 million citizens who previously were acquiring health insurance policies that met their needs – the risks they wished to cover; the co-pays they could afford; the out of pocket expenditures that met their budget and the limits they were comfortable with; now are forced to buy coverage for all sorts of things they never sought previously.  All those costs, for the 240 million, as their premiums rise  – those costs are not included above.  No one estimated those costs.
If you have been following the rise in the stock market you know that the second highest performing sector this year is health care - up over 35%.  Health care costs will rise – rise magnificently – and the vast but shrinking middle class, as usual, will pay.  The question is – can Obama blame the republicans for this situation?  The other question is – will PBS, NBC/Comcast and ABC; CNN, Fox and CBS continue to not tell the truth – Obamacare is a massive government mandate but most importantly, it is an even bigger entitlement program and the winners are health care service providers. The stock market knows.  It likes new entitlement programs.  The bigger the better.  We hope you invested in health care stocks - a while back - may even be a good idea now.
Posted by thefundamentals at 6:36 AM